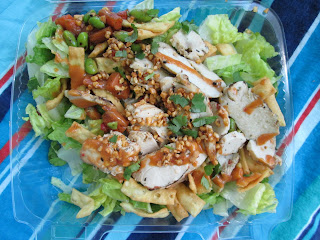 Lunch:  Panera Thai Chopped Chicken Salad
As pictured, except I pulled out all those little crispy wonton strips and guess what?  The 470 calorie salad was reduced by 130 calories (according to their website) because I didn’t eat them!  (I already indulged enough already this weekend!)  And I only used 1 container of the dressing (they gave me two) so I saved another 30 calories that way.
Check it out!  http://www.paneranutrition.com/NutritionCalculator.aspx
Bottle of water
Snack:  no snack today; trying to undo all my indulgences earlier this weekend!
Dinner:  Mexican Mother's Day!
Amy’s Mexican (beef & bean) Fiesta dinner (Pic above, Recipe below)
Served with 1 taco shell (Trader Joe’s taco shells are made with organic corn and zero sodium!)
½ avocado
Fresh lime juice
½ orange, in slices
Water with fresh lime
Dessert:   1 Gala Apple & Water
Amy’s Mexican Fiesta Dinner Recipe:
1 tbsp EVOO
½ yellow bell pepper, diced
½ sweet white onion, diced
2 tsp cumin
Salt/ pepper
1 15 oz. can of no salt added, diced tomatoes
1 15 oz. can reduced sodium black beans, drained and rinsed
½ pound ground beef, browned in pan
A bunch of cilantro, chopped
Fresh lime juice
Shredded cheddar cheese
Avocado
Toasted taco shells
Brown ground beef in pan.  Meanwhile in a cast iron skillet (or other oven safe pan) heat the EVOO and throw in the diced yellow peppers and onions and sauté until soft and browning around the edges.  Once beef is done, take off heat and drain extra fat and put on the side.  Then add the cumin and salt and pepper to the onions & yellow peppers pan and cook for a minute or so.  Then add the canned tomatoes, black beans and half the cilantro; mix ingredients, heat and reduce.  Once reduced add the cooked beef, mix in, take off heat and top with cheddar cheese.  Put in broiler to brown the cheese on top.  Serve with other half of chopped cilantro, taco shells, and avocados with a squeeze of fresh lime juice on top!
Posted by Amy at 9:15 AM