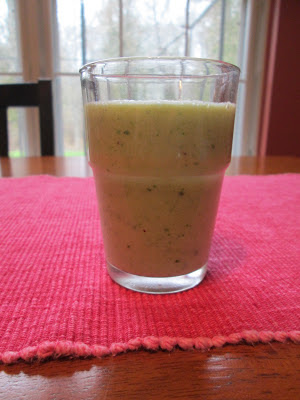 Daily Tidbit:    Another smoothie today:  a Tropical one with ripe Bananas, fresh Pineapple, Vanilla Yogurt & Romaine.  I think I like the flavor of the one yesterday a little more (which used Spinach instead) but the Romaine adds Protein among other things, and made it more crisp and refreshing!  Full recipe below. 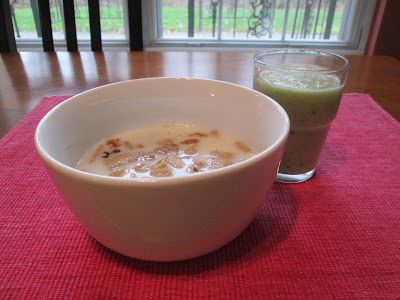 Love that the Shredded Wheat Cereal I'm eating now (Trader Joe's) has 2 ingredients:  Wheat & Vitamin E for freshness.  That is it, nothing else! 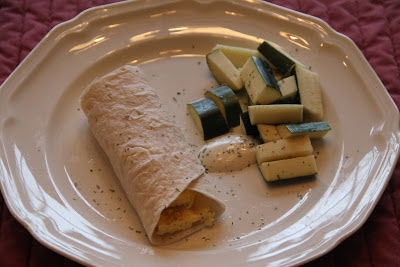 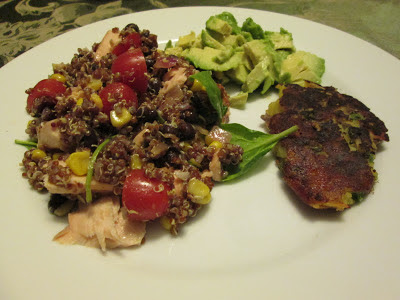 
*I have everything in the above plate, plus 3 slices of French Baguette dipped in EVOO and spices, and I had another serving of the Quinoa Salad - it was my first time making that and I really liked it! 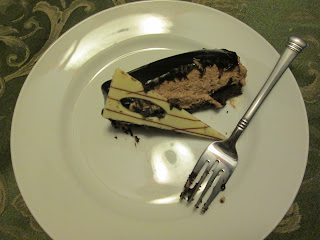 *Yes, I had a 2nd piece of this cake; it was a touch smaller than this one, how could I resist?

For this I just took some leftover Mashed Potatoes and Peas, mixed in some corn chip crumbs and Cheddar Cheese and fried them in the Cast Iron Pan with some Canola Oil - 4 minutes a side.  I made the aioli by mixing Olive Oil Mayo with Red Pepper Hot Sauce, Cumin and a little Ketchup for sweetness.